Alexander and Evaline were married in Neosho Falls, KS, where in 1881, a grist mill was rebuilt. It was a substantial 30x36 two-story building which took the place of an old one. This mill had the capacity of 100 barrels of flour per day. The following year, the woolen mill was sold and never reopened for that purpose. Alexander and his brother Charles William emigrated from England, and settled in Kansas, to raise sheep for the woolen mills back in England. Alexander was a descendant of four generations of milllers and grain merchants in England. 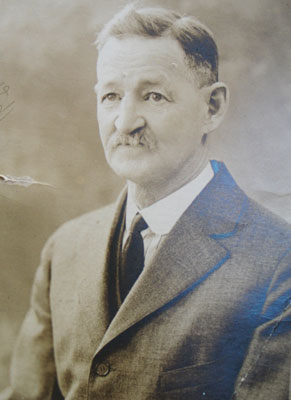 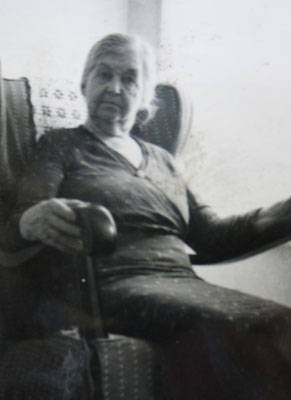 1882 KANSAS: The Parsons Weekly Sun, October 26 October 1882
“A.J. Pickering of Neosho Falls, and Miss Eveline E. De Mar, daughter of our townsman J. L. DeMar, were united in marriage on Tuesday, at the residence of Rev. Bowen, the rector of the Episcopal Church. The happy couple left on the afternoon train for Neosho Falls, which place they will make their future home.”

<< Back to parents, CWH Pickering & Elizabeth 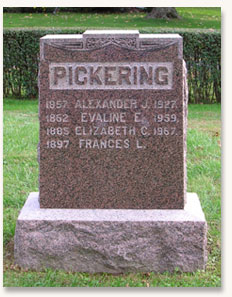 Alexander John Pickering emigrated from England to Kansas, USA at about the, age of 24 (1881, after his father’s death). He settled in Junction City, KS where he met and married Evaline DeMar in 1886. There are many people who remember Alexander with affection for his kindness but are quick to note that he didn’t appear to be as knowledgeable about investing his money as his other brothers and his father.

Alexander was about 24 years old when he went to Kansas. There he met and married Evaline DeMar whose family was originally from the Newtown, Pennsylvania area. We are not sure what his occupation was during this period. He lived for a while off his inheritance.

He moved to Philadelphia about 1892.  With his inheritance (it is said) he bought a professional basketball team called the “Swamp Poodles” (named after a section of Philadelphia) and lost most of his money. He was mainly remembered by everyone for his carpentry expertise. He owned a carriage making business in North Wales, Pennsylvania which did not turn out to be a lucrative business.

Alexander was a stock boy for John Wannamakers department store in Philadelphia, PA during the depression. Granddaughter Ruth, remembers standing by the freight elevator waiting to bring lunch to her Grandfather. She related that because he had a good knowledge of wool that when the wool merchants came to sell their wares to the department store they would “dress him up” to go out and bargain and choose the wools for the store. The next day he’d be a stock boy again.

“Evaline moved to Kansas from Newtown when she was very young. When she came back east they settled around 30th and Diamond (31st and Herman) in Philadelphia. Family lore holds that the DeMar’s were from France. It is said that they were chased out for religious reasons and their people were “Hugnenots.” It is also said that her family were among the first settlers of Frenchtown, NJ. Their name at that time was St. Germain. In the later years it was shortened to just German. Grandmother’s maiden name was German. Grandfather DeMar was also French, came to this country according to my sister Edith because his family wanted him to be a Catholic.” [from a letter of Jan 6 1978 of Emily Pickering Deibert]

1911 LIVERPOOL: Alexander John Pickering (1857-1927) departed from Liverpool to the U.S., through the port of New York, aboard the Lusitania. He traveled with his oldest brother, Charles William Pickering (1841-1928). Alexander was listed as a “manufacturer” and Charles was listed as a “contractor”. Source: New York Passenger Lists, 1820-1957, Ancestry.com