We are descendants of the PICKERING / WALKER / LIGHTFOOT families of Chester and Liverpool. 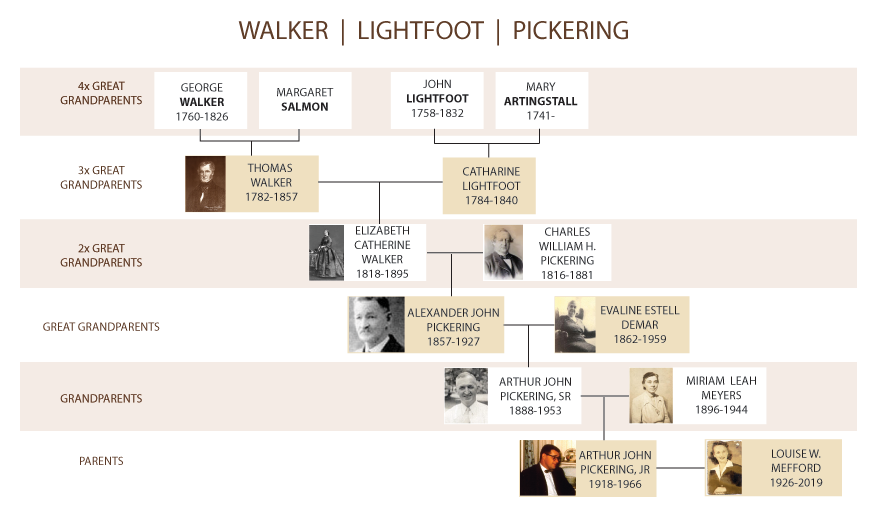 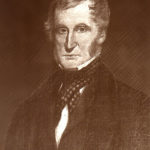 Thomas Walker was the son of George Walker, Brewer, and Margaret Salmon. According to the 1818 Chester Directory, Lightfoot and Walker were business partners and listed as “Malsters and Dealers in Malt.” George Walker, Upper Bridge Street was listed as “Liquor Merchant”.

At the time of Thomas’ marriage to Catherine Lightfoot his occupation was listed as “Tanner”. He must have been very successful in his lifetime as indicated by his listing as “Gentleman” at the time of his death in 1857. 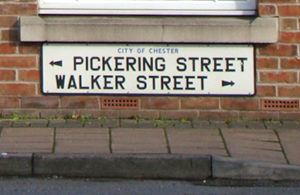 To illustrate how integrated these families were into the community and each other —  directly across the street from the Ermine Hotel in Flookersbrook, three streets connect to each other: Pickering Street, Walker Street, and Lightfoot Street.

Thanks to third cousin, Janet Leece for providing this impressive portrait of Thomas Walker and photo of sign in Floorkersbrook. [2013]
*From his 1829 Will I learned that he left “stock of barley malt and hops” to his heirs.

DANIEL CLOWES (1774-1829) THOMAS WALKER AT FLOOKERSBROOK, CHESTER signed, oil on canvas, 62.5 x 84.5cm. Provenance: Commissioned by Thomas Walker. Thence by descent to the present owner. Possibly dating from c. 1805, after Walker’s marriage to Catherine Lightfoot, this handsome picture depicts Walker on a horse which he was reputed to have bought from the Shah of Persia. Walker owned the Lion Brewery in Chester and was also a tanner; his yards can be seen in the background. Exhibited: Chester, Grosvenor Museum, 1985, `The Clowes Family of Chester Sporting Artists.’ Illustrated and discussed in the catalogue, this is designated as D.47 in the catalogue raisonné.

My Great Great Grandmother, Elizabeth Catherine Walker, married Charles William Harrison Pickering. Her parents were Thomas Walker and Catharine Lightfoot of  St. Oswald Parish, Flookersbrook, Chester where his occupations were listed as “Tanner” and “Victualer”. They are my 3rd Great Grandparents.

Thomas successfully carried on his father’s business as owner of the ancient Ermine Hotel which was located squarely on the busy Roman Road — today’s Hoole Road. For centuries it was a turnpike road that was a major coaching route and important stopping place for horses to be watered and travellers to rest before setting out on their long and hazardous journey.

Apparently much of our family’s wealth trickled down through their daughter Elizabeth Walker, who married Merchant Banker, Charles William Harrison Pickering, of Liverpool.

“My Grandfather on my Mother’s side was Charles William [Harrison] Pickering of Montebello, New Brighton, Cheshire, and also of 4 Rumford Place (his business address), Liverpool. He was a Merchant and also a Banker and was a Director of the Midland Bank, Liverpool, Dale Street Branch. His wife was a Miss Walker of Chester, whose parents owned the property whereon the Railway Station now stands, and was, I have heard a Snipe Swamp.

He was also very well off and executed Trust Funds for his children whereby my Mother (Edith Paulina Pickering Meyers) received some £8,010 in trust for her lifetime. He had a numerous family (12 I believe) of which 4 boys emigrated to America and became American Citizens. He employed Messrs Simpson, Harley & North, Solicitors of 1 Water Street, Liverpool as his lawyers and Mr. North (whom I knew personally) drew up his Will whereby he created a trust fund for all his children and wife, also during his life he made trusts for several of his married children, whereby he created the trust for my Mother’s marriage settlement. Personally I am the sole Trustee for the Pickering Trust which is not yet completed.”

Visit Chesterwalls.info for more information on the Ermine Hotel. 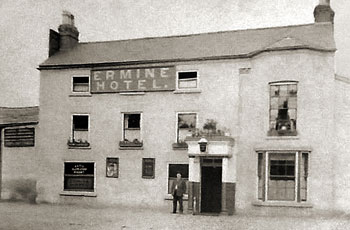 John Lightfoot (c. 1758) married Mary Artingstall (abt 1739-1780), widow of John Artingstall. He was licensee of the “Ermine” and a Malster in Flookersbrook until he died in 1780. The Ermine has been rebuilt several times and is very different today from the building of the 1780’s but it is still a Pub after over 350 years!

MARY ARTINGSTALL, of FLOOKERSBROOK, near this City, Begs leave to inform the Friends of her late Husband, John Artingstall, deceased,THAT she intends to continue the PUBLIC BUSINESS, as usual, at the Sign of the Ermine, in Flookersbrook aforesaid; and also to carry on the MAKING of MALT, under the Management of the Person employed by her late Husband, to whose Friends she returns her sincere Thanks; and assures them and the Public in general, that those who will please to favour her with their Commands, shall be served with the above Article upon the best and most reasonable Terms, By their oblig’d and faithful Servant, MARY ARTINGSTALL” Visit Chesterwalls.info for more information on the Ermine Hotel.

Just recently a 3rd cousin contacted me with information about Elizabeth Walker’s ancestors, which took me back two more generations! Many thanks to cousin Janet Leece from Chester, England, who supplied many missing links which allowed me to pick up more clues to our mutual Walker and Lightfoot ancestors. This information could not have been possible without her help.