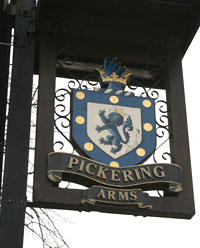 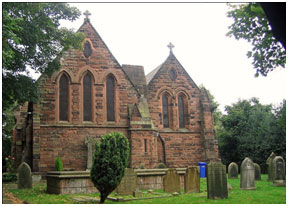 The ancient chapel at Thelwall – All Saints – “remained in this state of decay, no service being performed there beyond the burial of the Pickering family, until the year 1782, when Commissioners were appointed under a faculty from the Bishop of Chester to refit and repair it.”

The chapel was restored and was re-opened for service October 1782. The first incumbent then appointed to it was the Rev. Thomas Blackburne, B.A. on the presentation of Henry Pickering Esq. who held it until his death 27 April 1823; when he was succeeded by the Rev. Joseph Brindle, by Thomas Abree Pickering, Esq. The building was completed early November 1843.

In the window at the south-eastern extremity of the church are emblazoned the armorial ensigns of King Edward the Elder, the founder of the ancient city of Thelwall, viz. Azure, a cross-patonce between four martlets or, and in the same window are the arms of the families of Pickering and Nicholson, viz. Pickering, and Nicholson, first and fourth Azure, two bars ermine, in chief three suns or, the paternal coat quartered with Seaman, second and third Barry, wavy of six, argent and azure, a crescent or. Crest, out of a ducal coronet gules a lion’s head ermine. The only monument the church contains is one to the Pickering family, which was removed from the old chapel when taken down.

It is of grey and white marble and is surmounted by a funeral urn. Beneath it are the arms of Pickering sculptured and emblazoned as above. The vault of this family, which was situate in the interior of the former chapel, is now open to the rest of the churchyard, in which also is the vault of the Stanton family, who have been resident in this township for a century past.