CWHP was a principle of a large international banking firm named John Henry Schroeder & Company. In 1860 he built his home, Montebello, in Birkenhead, England where he and his wife raised a family of 11 children and were generous patrons of the community.

In 1857 Cyrus Field successfully enlisted the financial help of CWHP to seek funds to build a Transatlantic communications cable and CWHP became the managing director of the enterprise. He and his wife, Elizabeth Walker descend from generations of entrepreneurs and merchants who made their fortunes from taking advantage of the opportunities of their times. 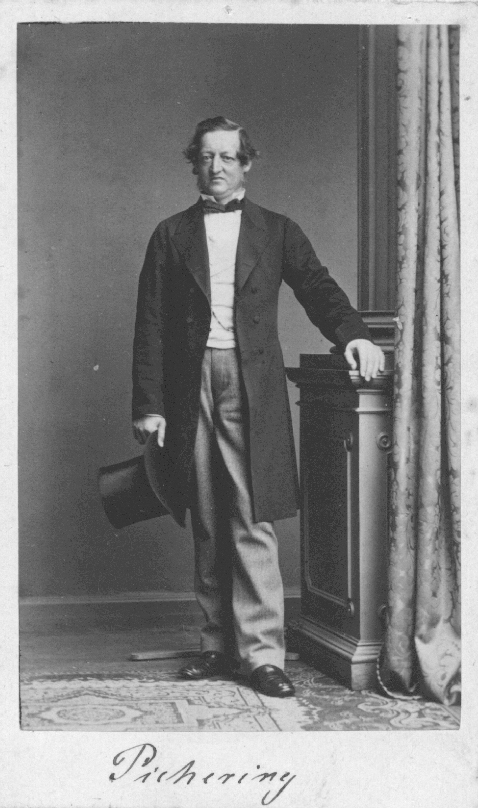 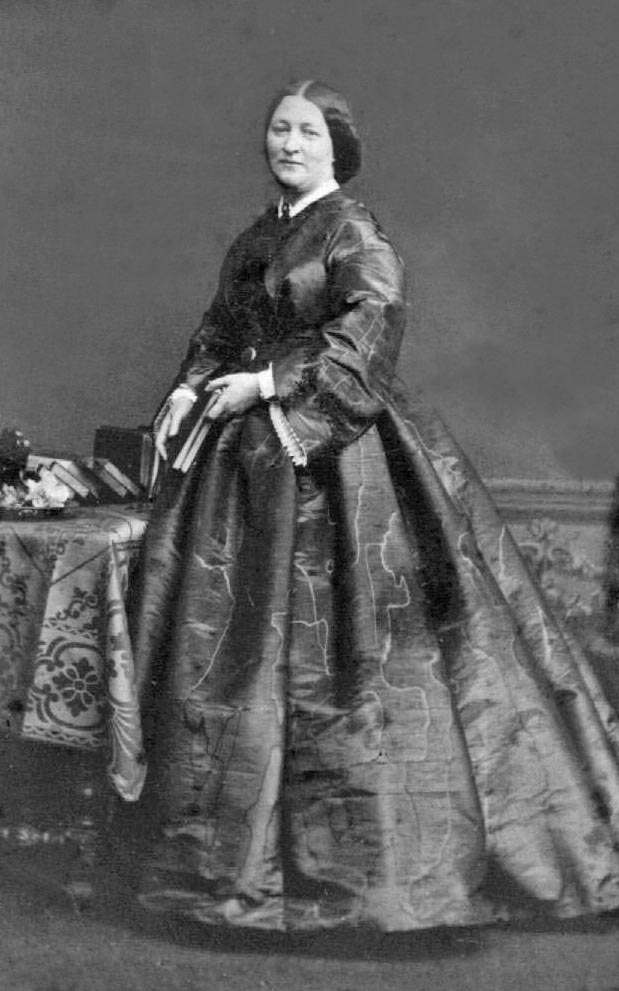 CWHP and the Transatlantic Cable

Charles was a principle of a large international banking firm named John Henry Schroeder & Company. The family built a home, Montebello, in Birkenhead, England. In 1857 Cyrus Field made his third trip to England to seek funds from the British government in order to build a trans Atlantic communications cable. He was turned down as he had been by the government in the United States but Charles Pickering convinced Mr. Field to stay an additional week during which time he was able to raise the funds privately from his own firm and that of Baron Rothchild. Charles became managing director of the enterprise.

The cable was laid in 1858 from both ends of the Atlantic using war ships provided by the American and British governments. The cable was spliced in mid Atlantic and the first message sent on August 5, 1858 by Charles and read “Glory to God in the highest, on earth good will to men”. This message was sent just prior to Queen Victoria’s message to the President of the United States.

That same day their youngest daughter was born she was named Valencia after the island in Ireland from which the cable left the continent.

[READ MORE about the Transatlantic Cable]

… a letter, of which the following is a copy, was read: –

“Sir, – I have much pleasure in informing you that, at a meeting held, today, as Association, called the Liverpool Cotton Association, comprising the leading firms connected with the cotton trade, was inaugurated, and in waiting upon you with a copy of the resolutions there passed, I have, in accordance with the third resolution, to invite your Association to name two delegates to act with the committee appointed to frame the constitution, laws, &c. requisite. – Awaiting the favour of your valued reply I am, sir, yours very faithfully. (signed) C. W. H. Pickering, Chairman of the Meeting, Liverpool, December 4, 1874.

… Considerable discussion took place, and ultimately the following resoltutions were passed. … That this meeting cordially accepts the courteous invitation conveyed in Mr. Pickering’s letter, and agrees to be represented at the proposed conference by two of its members (as delegates) on the understanding that such delegates do not bind the Connon spinners’ Association to the various details and rules of the new Association until they have reported to another meeting of this committee, to be specially called for that purpose.” 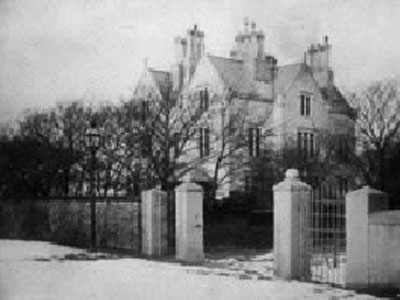 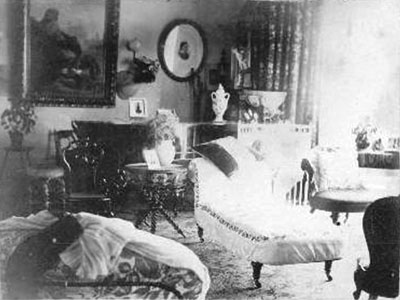 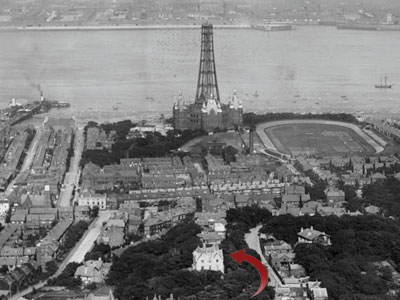 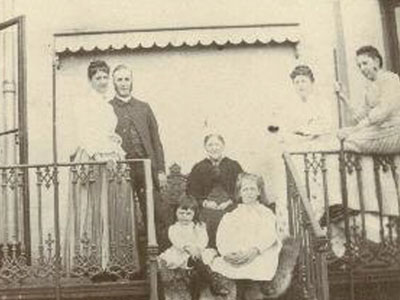 was the home of my Great Great Grandparents, Charles William Harrison Pickering and his wife Elizabeth Walker. Most of their 11 children traveled to all corners of the world as they left Montebello to strike out on their own.

My Great Grandfather, Alexander John was born in this home before eventually emigrated to the United States with his brother William. The first photograph [left] has been in my family for several generations. When I “found” another branch of our family just recently I sent them a copy of this photo – and lo! and behold – they also had a copy of the same photo!

For more details and photos, visit the Montebello page on this website.

Based on other photographs in our family album, I have been able to identify several of the members of this wedding party. Here is my best guess about those in this photo.

It is with deep regret we record the death of Mrs. Elizabeth Pickering, who for many years resided at Montebello, St. George’s Mount, New Brighton. The deceased lady, who was in her 76th year, left the district in October last on a visit to her son-in-law at Southampton, where she passed peacefully away on the 2nd inst.

She was the widow of Mr. Charles W. H. Pickering, J.P., a former member of the Wallasey Local Board, who died in 1881. Both during the lifetime of her husband and subsequently, Mrs. Pickering was well-known for her charitable benefactions, which were none the less appreciated from the fact that they were invariably dispensed in a quiet and unostentatious manner. An appeal in a deserving cause was never made to her in vain, and it can truly be said that her loss will be acutely felt in all parts of the district.

While a liberal supporter of the whole of the Wallasey charities, Mrs. Pickering was more particularly interested in the New Brighton and Liscard District Nurse Society, of which she was one of the original promoters and of which she held the position of president at the time of her death.

The remains of the deceased lady were removed from Southampton to New Brighton on Saturday, and were on Tuesday afternoon laid to rest in the family vault at Wallasey Churchyard in the presence of a large gathering of sorrowing relatives and friends. The officiating clergy were the Rev. Canon Linton (St. Mary’s., Birkenhead), the Rev. C.H. Hylton Stewart (vicar of New Brighton), and the Rev. Stephen Gray (curate of Wallasey). An impressive choral service was conducted in the church, the choir boys, under the leadership of Mr. T. Hill, chanting the Psalms and also effectively rendering a hymn, whilst at the graveside, after the coffin had been lowered, they sang “Peace, ever peace.” 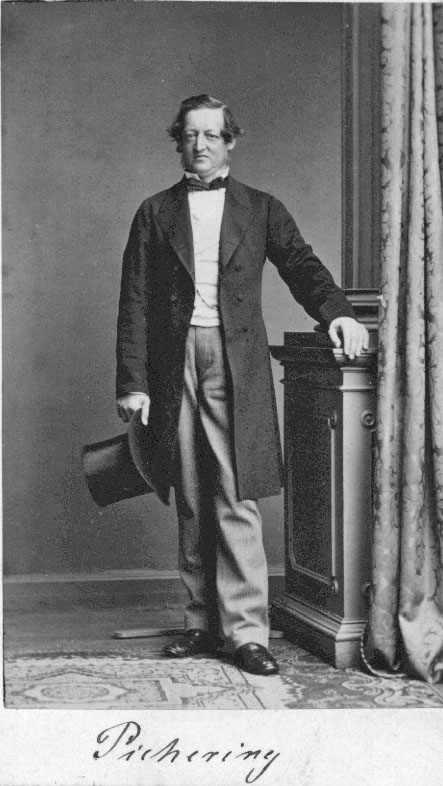 “Christian Matthias Schroder & Co. was the leading Schroder firm in Hamburg from the 1760s to the 1850s. During the 1820s, 1830s and 1840s Schroder ships, named after female members of the family, plied their way to South America and to the Baltic, and the firm conducted a large business as an importer of coffee, spices, grain, wine and textiles. In the United States, a younger son of Christian Mattias II and a second cousin formed Schorder, Mummy & Co. in New Orleans in 1848, with an eye to participating in the cotton trade, and in 1856 a a mercantile house which conducted a general commission business was formed. This gave rise to the specialist activity which in time came to be called ‘merchant banking’.

By mid-century, Hamburg was the largest port not only of Germany but also of continental Europe, and the fourth largest port in the world after London, Liverpool and New York.

In July 1839, Johann Heinrich established a third firm, J. H. Schroder & Co., in Liverpool. To manage the firm he engaged Nikolaus Mahs, and Charles Pickering, a local man from the family of Pickering Brothers, Liverpool corn merchants. Pickering and Mahs were taken into partnership in October 1842, apparently to satisfy the Liverpool branch of the Bank of England, which was unwilling to allow the firm to open a drawing account in the absence of a resident partner.

The 1850s were highly successful years for Johann Heinrich’s Liverpool house. By the end of the decade it was the fourth largest recipient of consignments of cotton in Liverpool. In these years the firm was run by Charles Pickering and the chief clerk, Julius Servaes, who was made an associate partner in 1856. Nikolas Mahs, who had been taken into partnership along with Pickering in 1842, resigned to form his own firm.

Schroder’s consignment business stagnated in the early 1870s and went into long-term decline from 1876. The contraction of the firm’s activity was accelerated by changes particular to the tallow, grain and sugar trades – the most important goods it received on consignment. The tallow trade waned in the 1860s with the advent of kerosene oil lamps, which also meant a shift in the pattern of trade away from Russia, since it was the Pennsylvania oil field that supplied the world’s petroleum requirements in the early days of the industry. Likewise, the grain trade was shifting from the Baltic and the Black Sea to the Atlantic, because American grain was superior in quality and cheaper. Lastly, developments in the Cuban sugar industry [dried up] that source of consignments.

While the business of the Produce Deparment declined, that of J. H. Schroder & Co.. of Liverpool and the other cotton consignement merchants virtually disappeared following the opening of the Atlantic Telegraph in 1866, which permitted direct contact between buyers and sellers, thus eliminating their role. Charles Pickering, who had been there from the outset, was a spent force and retired in 1881 [ed. He also died in 1881].

From 1869 onwards the accounts of J. Henry Schroder & Co., show large balances on account of the Liverpool house, suggesting that its capital was not being actively employed in business, and in 1883, upon the death of Johann Heinrich, the firm was wound up.

[ed. The Schroder business and banking dynasty continued through both World Wars and through many mergers, and generations of Schroders, still exists today . . . ]

Many [banks] were acquired by British or overseas banks, but most of the highly regarded firms remained independent. Schroders, which enjoyed a head start on account of its US interests, pushed the internationalisation of its business further than most of the other London merchant banks. The establishment of the international Schroder group of companies in the 1960s, 1970 and early 1980s was the first stage in this process. The second stage, which was achieved in the latter half of the 1980s, was the integration of the conduct of operations on a worldwide basis. In these years, the international Schroder group of companies became a single entity – Schroders.”

Mr. Charles W. H. Pickering, J.P., died suddenly in London, from disease of the heart. He resided for many years at New Brighton and was a partner in the great banking and merchantile firm of Messrs. J. H. Schroder and Co.

He stood in the foremost rank of Liverpool merchants, and was held in the highest esteem on “Change, over which the news of his death cast quite a gloom. In his business capacity he was the embodiment of all the sterling qualities and virtues which have made the name of English merchant renowned and esteemed throughout the world. In private life he was always ready to assist in works of benevolence, and was continually performing deeds of unostentatious charity. He never took part in politics, but in his own sphere lived a life of usefulness having been engaged in commerce for something like forty years. He leaves a widow and several sons and daughters, who have the hearty sympathy of a wide circle of friends.

The remains of Mr. C. W. H. Pickering, whose demise took place on Tuesday week, were interred at Wallasey Church, on Tuesday in the presence of a great number of the deceased gentleman’s relatives and friends. A large number of people living in the surrounding district assembled at the church to pay the last mark of respect to the deceased.

The officiating clergymen were the Rev. R. D. Fowell (Vicar of New Brighton) and the Rev. H. P. Linton of St. Paul’s, Birkenhead. A detachment of the county police, under Inspector Roche, was drawn up outside the church. The funeral arrangements were carried out by Messrs. J. Roberts and Co., Argyle-street.