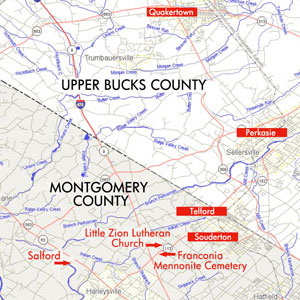 The original inhabitants of the Souderton-Telford region were the Lenni-Lenape, also called the Delaware Indians. They were among the first to come in contact with Europeans in the early 1600s. Pokasie, today Perkasie, is believed to be the Lenape village nearest to Souderton.

Montgomery and Bucks Counties, where Souderton and Telford are located, originated out of the land granted to William Penn, which he purchased from the Lenape, who, due to the massive amounts of immigrants who began to pour in, were eventually forced to head west.

Souderton was first settled by immigrant Welsh, giving Souderton the early name of Welshtown. These were followed by German Mennonites beginning around 1719, and by 1750 they would occupy most of the land. The town is named for one of its pioneer settlers, Henry O. Souder.

Souderton was almost entirely developed for agricultural purposes, and was known as a small farm service oriented community. The railroad enabled Souderton to grow not only in industry but also as a community. The textile and cigar making industries brought prosperity and population to the borough. Some of the big cigar manufactures at this time had factories in Souderton. However by 1920, automation in the cigar industry reduced the need for labor and space and the industry started to decline in Souderton. The textile mills remained prominent in Souderton after the decline of the cigar industry. In the years following World War II, the need for expensive labor in the textile industry was eliminated. My great grandmother, Katie, worked in the textile industry and members of the Souder family worked in the cigar manufactory.

Franconia Township was originally a part of Salford Township, which was established about 1727. However, in 1731, Franconia, which included areas now occupied by Souderton and the Montgomery County portion of Telford, separated from the original Salford Township. The major reason for the split was that the township had grown too populous for one constable to serve.

The name Franconia signifies “the land of the Franks” and is a name derived from an old German Duchy. On a map prepared in 1682, Franconia is called “The Dutch Township,” inferring a predominance of German settlers. Descendants of these original settlers are still found today in large numbers in Franconia and the boroughs of Souderton and Telford, which were a part of Franconia until the 1880’s and 1890’s.

The first settlers found the valley of the Indian Creek under Indian cultivation and consequently named the stream after them. The Indian Creek valley was perhaps more thickly settled with Indians than any other place in Montgomery County, attested by the vast amount and variety of relics found within the valley. In addition, the northern section of the township was known as “Indianfield,” even as late as 1809.

QUICK LINKS to
MY FAMILY TREES

I am a descendant of:

• Abraham B SOUDER and Leah Fillman
(my 3x great-grandparents) 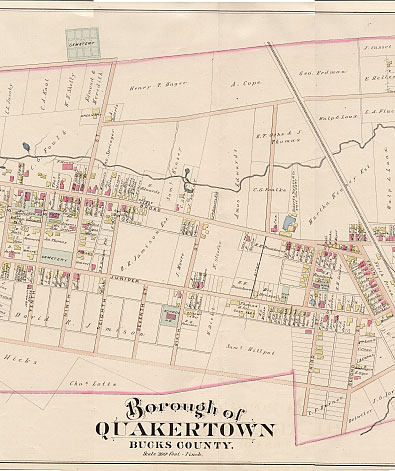