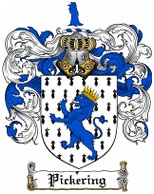 Pickering (Wallford**, co. Chester) Erm. A lion ramp. Az. Crowned or, within a bordure of the second, charged with eight plates. Crest – A lion’s gamb erect and erased az. Enfield with a ducal coronet or

The earliest spelling of the family name is shown to be that of Reginald de Pichering, which was dated 1165, in the “Pipe Rolls of Yorkshire.

Iterations of the Pickering name have been found to be:

Early records of the name mention PICHERINGA (without surname) who was listed as a tenant in the Domesday Book of 1086.

1208 – The name was documented as PIKERING, Yorkshire

1246 – Henry de Pikeringes in the Feet of Fines of Oxfordshire

1273 – Hugh de Pikering of the County of Yorkshire

1327 – John Pykeryng recorded in the Subsidy Rolls of Somerset

1562 – Marriage of Richard Pickering and Anne Swynerton on February 10th 1562, at St. Andrew by the first recorded

1570 – Hugh Pickering of Warkworth, Last Will and Testament, buried in churchyard of Great Budworth