The mill and the quay were constructed for Thomas Warburton in 1670.

In 1784 Sutton Mill and house was rented to John Pickering for 20 years by landowner, Sir Peter Warburton, 4th Baronet of Arley Hall. This is where my 4xGreat Grandparents, John Pickering and Mary Harrison Pickering, raised their family … and these were my ancestors.

In the spring of 2011, I visited the Quay and Sutton Mill in Frodsham where I photographed the remains of this once-powerful mill on the banks of the River Weaver. At the time it was built it was the largest mill in Cheshire.

that our Pickering family was heavily tied into the Warburton estate at Arley Hall. Paid receipts for services performed beginning about 1750, Pickering tradesmen worked on the estate beginning with carpenter, Samuel Pickering in 1750. It appears as though Samuel might have been a manager who hired workers and presented bills to the estate.

19 May 1787 receipt from Sir Peter Warburton, Bart to John Pickering [1744-1814] Lessee of new mill in Sutton. Two accounts for building work on the new mill. John would have been about 43 years old when he purchased the mill. Source: Arley Hall Archives 1750-90, “Life on a Cheshire Country Estate” ArleyHallArchives.co.uk. 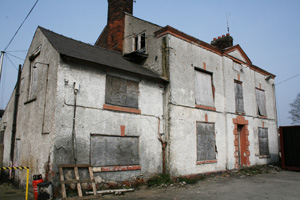 Grade II building, c. 1820. Originally part of a water-powered corn mill, this has been later used as an office building. The building is in painted brick, the front of which is pebbledashed, and it is symmetrical with two storeys and an attic. It has a two-storey pedimented porch and sash windows.

Sutton Weaver is a small village

in Cheshire situated between the towns of Frodsham and Runcorn. The Sutton Mill property was rented by Sir Peter Warburton to John Pickering, who ran the mill beginning about 1784. It was the largest corn and flour mill ever built in Cheshire at the time.

In the early 1780s the estate of Sir Peter Warburton converted the old cheese warehouse into a new mill. This was probably because by then much of the cheese going to the south of England was transported on the canals. They used a cut from the river Weaver which had been made in the 1730s and then improved to create a large high-power new corn mill on the Weaver beside the Mersey estuary. According to 1844 Tithe maps, by the mid 1800’s the land was owned by Sir Arthur Aston and leased to miller John Rigby Pickering.  (see extract of map of 1753 under Cheese Warehouse). Source: http://www.arleyhallarchives.co.uk/corn.htm

the water-ways of north west England had been greatly increased and improved.

Ships carrying grain from the south of England, the Baltic or America could deliver it cheaply into the new Sutton mill so that flour and oatmeal could be economically carried to the rapidly growing industrial populations.

“A Fire at Sutton Mills”

November 2, 1808: “A fire broke out in the water corn-mills of Mr. Pickering, at Frodsham-bridge, Cheshire, which entirely consumed the same. The damage done is very considerable; many thousand measures of corn having been destroyed. Among the principal sufferers are Messrs. Chadwicke, Brereton and Leadbeather; the former of whom had upwards of 3,000 measures of corn upon the premises. These mills are the property of Sir Peter Warburton, bart.”

1811 Last Will and Testament

… Then I give devise and bequeath unto my beloved Wife Alice [Rigby] Pickering, All my real and personal Estate I now hold jointly with my Brother, Thomas Pickering of Runcorn … Corn dealer …

…  I nominate constitute and appoint my said Wife Alice Pickering, and my Brother in law George Rigby and Thomas Rigby Junior, Executrix and Executors of this my Will …

1814 Last Will and Testament

of Thomas Pickering of Sutton, Miller

1820 Last Will and Testament

… Upon the Trusts following that is to say Upon Trust that my said Trustees and the survivor of them his or her Executors administrators and assigns do and shall permit and suffer my said Son William Pickering to superintend and manage the said Sutton Mill jointly with the said Alice (Rigby) Pickering or her appointee as Co Manager during the residue of our term therein and do and shall in consideration of this devoting his name to such Management during the said term well and truly pay unto him a salary of Thirty pounds per annum out of the profits to … from the said Mill to commence from the day of my decease and be increased to the sum of fifty pounds per annum from the day of his Marriage …  Read entire Will here. 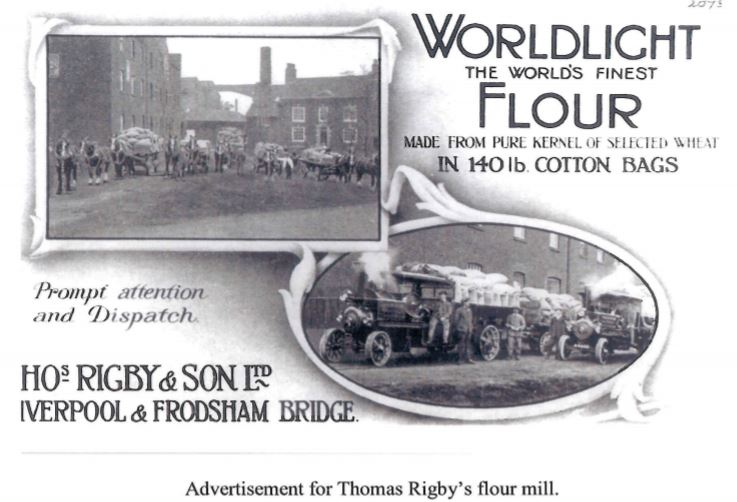 In 1794, about 10 years after his father bought the Sutton Mills, Samuel Pickering, Corn Dealer and Miller, married Alice Rigby, from a prominent milling family in Frodsham: Thomas Rigby and Son, Ltd. Their first son, John Rigby Pickering, Esq. married into another influential family by marrying Ellen Ashley in 1841. John Rigby Pickering was a major supporter of the St. Lawrence Church and a stained glass window in the church bears a dedication to the memory of him and to Robert Wainwright Ashley.

between George Heron of Daresbury Hall, clerk (a devisee in trust and an executor of the late Henry Charles Aston of Aston Hall, esq.), and John Rigby Pickering of Frodsham, meal and flour dealer (on the part of Alice (Rigby) Pickering), for arbitration concerning a dispute about an expired lease of Sutton Mills and adjoining premises.

there are only two lines regarding Sutton: “Sutton is 1 mile south of Middlewich containing only three farms and a Mill with a population of 23 and 160 acres. The following are in occupation:
…… James Beech, Farmer, The Cottage
…… John Garnet, Farmer, Glebe Farm
…… Samuel Pickering, Miller
…… George Sutton, Farmer, The Hall Farm

“At the time that I was born the 23rd of August 1785, my Parents John and Mary Pickering, lived at Bridge Hous one mile from Frodsham in Cheshire but, as I was the youngest Child of my Parents viz, seven Sons and four Daughters, and my oldest Brother Thomas, having been born the 23rd August 1765, he was exactly twenty years older than I was, and old enough to establish himself; 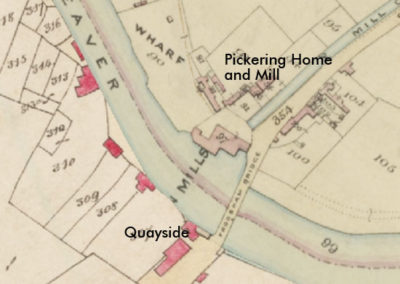 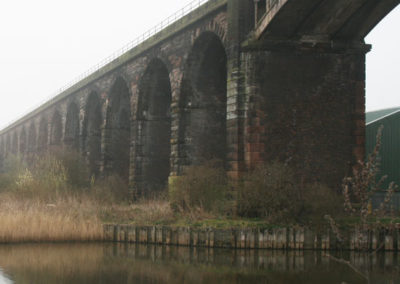 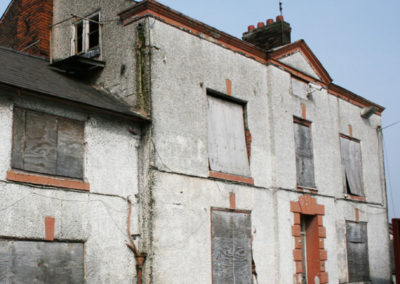 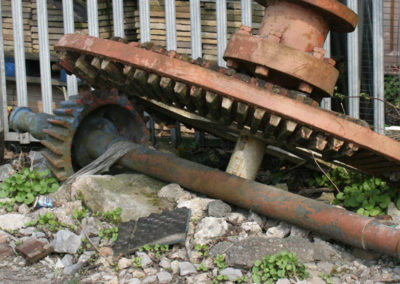 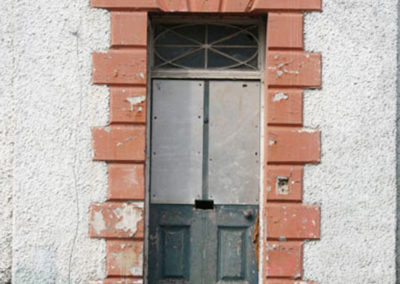 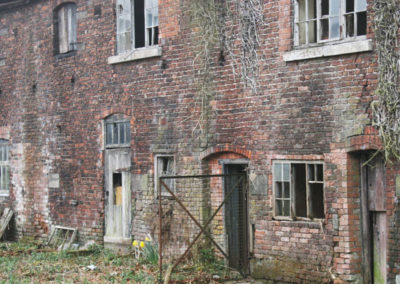 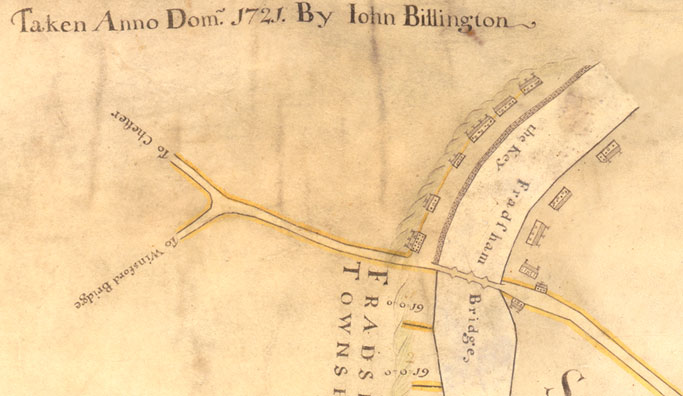 Charming hand-drawn 1721 map of the River Weaver by John Billington. This map indicates buildings in the location of the Sutton Mill. It is not know at this time what type of buildings were there in this 1721 map. Click here for more on this map.