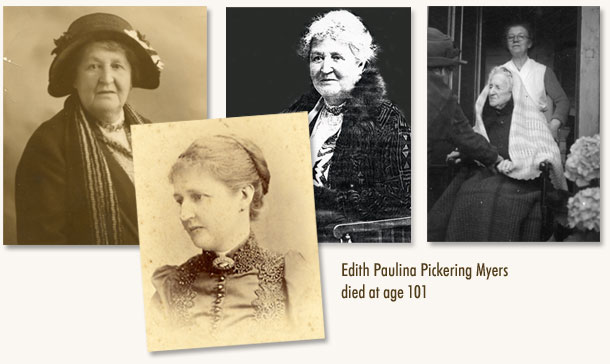 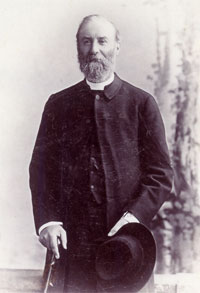 << Back to parents, CWHP and Elizabeth Walker 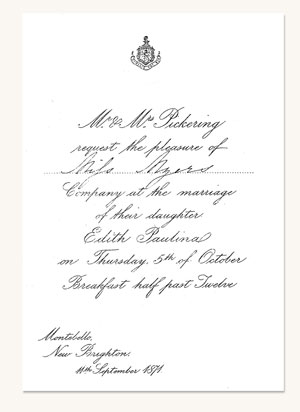 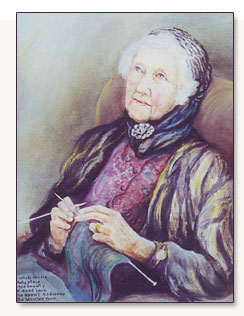 This painting was done by Frieda Myers of her mother on her 94th birthday.

The saying on the bottom left reads: “As a white candle in a holy place, so is the beauty of an aged face. As the spent radiance of the winter sun, so is a woman with her travail done.” by Jo Campbell

“Edith is buried at Invervrie in Scotland which caused some dismay as a place had been reserved for her at Ruskington next to Rev Arthur Myers.

Edith was buried at Inverurie because she died whilst visiting her daughter Freida. Freida lived near Aberdeen and had married rather late in life a Dr. George Bruce (1884-1975). They had no children.

Freida apparently did not want the hassle of getting Edith’s body to Ruskington so had her buried at the local churchyard. Freida went to live with David’s mother Molly for the last ten years of her life. To quote David (Eckersley-Maslin), “the first Molly knew about Aunt Freida’s arrival was when she received a telegram to say that ‘have sold my home (in Scotland) and am coming to live with you. Please meet me tomorrow’. She stayed nearly ten years until she died”. However other people talk of Freida as very charming and talented. She was an artist.

Many thanks to David Eckersley-Maslin allowing this painting to be shown on our website. And thanks to Catherine Clarke, NZ, both descendants of EPP and Arthur Myers.

There are a few gaps but the later part of the pedigree was done in 1873 by Henry Newbold, the family lawyer and husband of Ellen Myers (sister of Arthur). He had researched the wills and all the dates I have been able to check are correct.

The Myers (Myres) came to England in the 16th century – they were Flemish weavers. John Myers acquired land in Cumbria known as “Dunningwell” through his wife Elizabeth Stable in 1755. I have a copy of the deed for a peppercorn rental.

His son or grandson was the Rev John Myers (1739-1821) who studied at Cambridge and amassed a considerable fortune by marring well FOUR times! He obtained the “living” of “Myverton” and was Rector of Somerby. This was passed to his son and then to the son’s nephew’s son, the Rev. Charles John Myers (1801-1870) who acquired the livings of Flintham and Ruskington as well as inheriting “Dunningwell”.

Rev. C. J. Myers married Mary Caroline Ward, daughter of Samuel Broomhead Ward. Her sister, Sarah Ward, married James Rimington of Broomhead Hall and their daughter married the Earl of Ranfurly. Mary Ward’s mother, Gracie Martindale had an uncle, John Harrison (1733-1803) who was the purser on Captain Wallis’ ship, the “Dolphin” which discovered Tahiti in 1767. He was at the taking of Quebec in 1759 by General Wolfe and fought under Admiral Rodney, 1782. John Harrison left his fortune to his neice, Grace Martindale, and she erected a monument in his honour in the Masham Church, Yorkshire.

C.J. Myers and Mary Ward had twelve children, only three of which had any children of their own. So, apart from David Eckersley-Maslin and possibly one other, the New Zealand Myers are the last remaining ones. Their eldest son, Major Charles John Myers (1843-1910) built the present mansion called “Dunningwell”. The second son was Arthur Myers, who married Edith Paulina Pickering.

He inherited the rectorship of “Ruskington” Church from his father but the vicarage living was purchased for him by CWH Pickering, (her father) so it was combined into one mediety.

It was expected that Fred would follow the family tradition into the church, but he refused and emigrated to NZ in 1892 at the age of 17 to work on the farm of his cousin, Fred Eugene Pickering. His father, Arthur Myers, had a mental breakdown (see Ruskington notes) and Edith was so upset with Fred that she disinherited him. 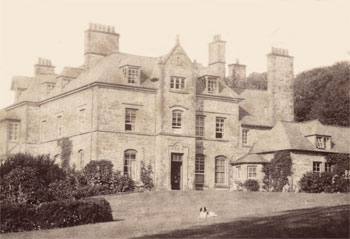 The Dunningwell estate was set up as a “male in tail” which basically means that everything goes to the eldest son, so when CJ Myers died childless in 1910, Fred inherited the whole estate which consisted of the mansion, a post office, the local village inn, 4 farms and cottages. There was a catch however, CJ Myers’ wife Clara was to receive the income and use of the estate during her lifetime and she lived until 1944. Fred returned to England with his wife and 2 eldest children from 1910-1912 to try and sort it out. I have many letters wirtten between him and his cousin Charles Newbold (the family solicitor) after he returned to NZ. They are fascinating reading the describe his struggle making ends meet and his life in NZ. He had little money and survived on legacies left to him by his Myers aunts who seemed to have great regard for him.

My grandmother was born in 1913 and her mother, Alice, died in 1918, so Fred had three children to take care of plus a farm to run.

My mother was born in 1933 and her father, AHM Maurice was also born in England and came to NZ at the age of 17 like his father-in-law. That is another story again, but he has traced his family back to Nell Gwyn (the mistress of King Charles II). When my mother’s father was away at the war her mother became very ill with tuberculosis and had to spend time in a sanitorium so it was her grandfather, Fred, who took care of the three children and he holds a very special place in my mother’s heart.

When Clara died in 1944, Fred had no wish to return to England to take up his inheritance (he was 70 years old by then), so “Dunningwell” was sold and the money invested in war bonds which when they were sold in 1953 realised 26,000 pounds. This was brought back to NZ and used to buy his son a farm. Fred died in 1955 shortly after my mother’s marriage and of course before I was born.

I am married with two children, Bridget, age 14 and Theo, age 10. I work full time as a laboratory technologist at Whangarei Hospital. We also run a bed and breakfast from our home and meet a lot of people from overseas. Myers is listed as an inheritor of the estate of Valencia Pickering.