PICKERING ORIGINS
from Yorkshire to Cheshire and Beyond

Pickering Castle, Yorkshire belonged to a succession of kings and nobility, notably Henry III and Edward II, none of which were named Pickering. The place-name of Pickering was most probably more ancient, and the castle took its name from the surrounding area. Most likely the first person to take the name of Pickering was a person who came from the immediate area of the castle and was endowed with land for some good deed he performed for nobility. From very early on the Pickering family not only probably held lands and estates in Yorkshire but were also actively allied with other influential families. 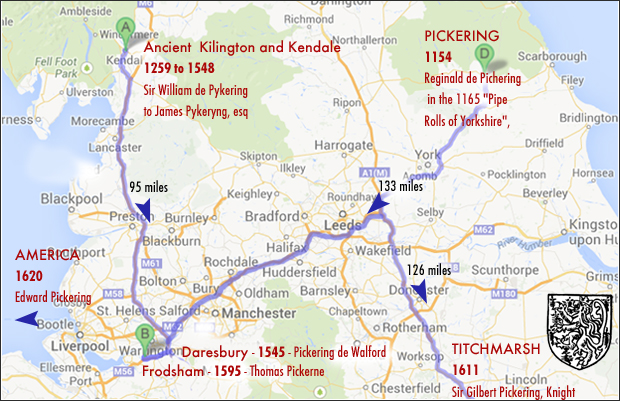 This long-established surname recorded in the spellings of Pickering, Pickerin, and the dialectal spellings of Pickring, Pickin, and even Puckrin(g), is of Anglo-Saxon origins. The town name derives from the Olde English pre 7th Century tribal name “Piceringas“, or possibly from “Picoringas”

It is interesting to note that when new bearers of the name arrived in a parish, the spelling in the church registers tended to reflect the variant already established there, the Pickerings of Holderness being known as Puckering during their stay in Rise, but reverting back to Pickering once they moved on. Pickering is by far the most common variant, though pockets of Puckerings still resist in the East and North Ridings of Yorkshire.

A Coat of Arms granted to a Pickering family is silver and red chequy, a black bend.

1069-1070: Yorkshire – Pickering Castle was founded by William The Bastard [William the Conquerer] during his ‘Harrying of the North’ campaign in order to control the remains of the local population as well as defend his territory from both the Scots and the Danes, who had landed at both Scarborough and York in the last five years. Pickering Castle began life as a simple wooden motte-and-bailey castle.

1086: Yorkshire – The place name was recorded as “Picheringa” in the Doomesday Book. Pickering was a settlement in the hundred of Dic and the county of Yorkshire. It had a recorded population of 1.4 households (approx. 42 villagers) in 1086, putting it in the smallest 20% of settlements recorded in Domesday (NB; 1.4 households is an estimate, since multiple places are mentioned in the same entry.) Households = 30 villagers.

1108: Yorkshire – Pickering was a royal castle, and Henry I, William The Bastard’s second son, stayed at Pickering Castle.

1157: Pickering, Yorkshire  – Stephanus Pikaringa, son of Gamel, swore on oath in a charter regarding the king’s waste in Pickering Marishes

1165: Yorkshire – The first recorded spelling of the family name is shown to be that of Reginald de Pichering, in the “Pipe Rolls of Yorkshire”, during the reign of King Henry II, known as “The Builder of Churches”, (1154 – 1189).

1166: Yorkshire  – From the Yorkshire Assize Rolls for the reigns of King John and King Henry III:
“On the other hand, William son of Roger is allowed, for the consideration of one mark, to have an inquisition in the first instance. And at a later date Walter son of Robert de Pickering, accused of the death of Ralph the Mercer, who was killed in Scarborough, puts himself on a jury of the vill for good and ill; and the jurors say that he is guilty.”

1204: Pickering, Yorkshire   – The place name was recorded in the Close Rolls of Yorkshire as “Pikering” which contained copies of royal grants of land or money.

1207-1210: Pickering, Yorkshire – There are records of work on the drawbridge taking place during the reign of King John.

1246: Oxfordshire (Oxford) – Henry de Pikeringes, in the Feet of Fines of Oxfordshire
Pickerings were already to be found outside Yorkshire as early as 1246. Henry de Pakering appeared in the Somersetshire Pleas in 1257. They turn up in such disperse counties as Westmorland, Cumberland, Wiltshire and Dorset in the 14th century.

1308: York –  “. . . to the orderm award, arbitrament, sentence, and decree of these venerable men, Mr. William de Pikeryng, and Robert de Pikeryng, his brother-german (A full brother: a brother born to the same mother and father), Canons of York, and John, Prior of Bolton in Craven . . .” also, “Hugh, priest of Pickering;”

1327: Somerset – John, William Pykeryng, recorded in the Subsidy Rolls of Somerset (It was primarily confined to prosperous householders)

1383: Killington, Westmoreland (since 1260) – Sir James Pickering of Killington, son of Sir John Pickeirng (in 1383 he is referred to as ‘Monsr. Jacobus de Pikeryng Chivaler. One of the most influential members of the northern gentry in the late 14th century, Sir James came from a family of Westmorland property owners, whose land lay, for the most part, in and around the manor of Killington and the town of Kendal. (See complete biography (1) below)

1516: London, Byland and Oswaldkirk, Yorkshire – Sir William Pickering, of London. Knighted 22 Feb 1547. b. 1516/17, 1st son of Sir William Pickering of London, Byland and Oswaldkirk by Eleanor Fairfax, da. of William Fairfax
The accession of Elizabeth brought Pickering a last flash of notoriety. Unmarried, reputedly successful with women, and a Protestant, he was for a time spoken of as a candidate for the Queen’s hand. Ambassadors reported his secret visits to the Queen; he had taken up residence at court, entertained lavishly and showed extravagant tastes; he dined alone with music playing, had made his way into the royal chapel reserved for the nobility—to the fury of the 12th Earl of Arundel said to be his rival in the Queen’s favour—and had challenged the 2nd Earl of Bedford to a duel for having spoken ill of him. The truth is probably that Pickering never considered himself a suitor: the Queen, he told ambassadors, ‘would laugh at him and at all the rest of them as he knew she meant to die a maid’.

1558: Flamborough, Bridlington – Sir John Puckering of Flamborough, the “dour Keeper of the Great Seal” at the court of Elizabeth I

1533-1603:  Walford / Runcorn, Cheshire
“In the reign of Queen Elizabeth they were settled at Walford, in the parish of Runcorn, which had long been the seat of their ancestors, and the names of the members of the family for successive generations will be found in the early registers of Daresbury. The pedigree at the Herald’s College lists “Pickering de Walford” which was the name of the estate within the chapelry of Daresbury.”

SHIELD: Erm. A lion ramp. Az crowned or within a bordure of the second charged with eight plates
PICKERING, Wallford, co. Chester
CREST: Pickering, [Wallford, Ches.] A lion’s gamb, erect and erased, az. Enfiled with a ducal cornet or.

1600: Tarvin Cheshire – Pigot’s Directory of Cheshire “A grammar school was founded here, (Tarvin) in1600, by John Pickering, merchant, who endowed it with the sum of £200, which was laid out in lands.”

1619: Thelwall, Cheshire – Robert Pickering, Esq. , baptized at Daresbury, 30 May 1619, inheritor of John: purchaser of Thelwall from the Mores. “Being destined for the law” was entered as a student at Gray’s Inn 1637. He married Martha, daughter of Rev. John Ley of Christ Church College, Oxford. “His ancestors were of Walford, in Mobberley, in the time of Queen Elizabeth, and in whose family it still continues to be vested.”
….. Robert attained considerable eminence in his profession, and was several times elected as Reader of the Society. In 1651 he purchased, for 5,190l, amongst other premises, all that capital mansion-house called Crowley Lodge in Crowley, within a certain place called Northwood Park (formerly a part owned by the Crown), in the parish of Great Budworth, Cheshire with about 150 acres. In consequence of this purchase, he was removed of his seat at Walford, home of his ancestors, and continued to make Crowley Lodge his home until he bought Thelwall. His name appears on the Roll of Knights and Esquires in Cheshire in 1650.
…… The purchase of all the lands and buildings are listed in detail in the “Typographer and Genealogy”. Robert’s  brothers, Thomas of Chester, and Peter of London, along with Thomas Cheshire of Halton, were also involved in the purchase of Thelwall. The deed was signed in the presence of their brother, John in 1664.
….. In addition to Thelwall, Robert owned the greater part of Hatton in Cheshire, including the manor-house called Quietsy Biches, the ancient seat of the Hattons, which he purchased about 1850. In Sir Peter Leycester’s history of the county in 1666, writes “At this day Robert Pickering of Thelwall, Esq. is lord of the greatest part of Hatton; and in the adjoining township of Moor.”

1645: Thelwall, Cheshire – John, heir of Thelwall, born 1645. He entered Gray’s Inn in 1664 and became a lawyer for only a short time because he came into an “ample fortune”. During the lifetime of his father he resided in Crowley Lodge, then moved to Thelwell. He married Abigail Sherrard. By (second marriage?) to Ann Bennett of Greenwich, he had issue.

1655-1705: Whaddon, Cambs – Sir Henry Pickering of Whaddon, Cambs. and St. George’s, Barbados: b. c.1655, 2nd but only surviving son of Sir Henry Pickering, 1st Bt.†, of Whaddon. Pickering’s father, a moderate Puritan, had represented Cambridgeshire under the Protectorate but had been sufficiently flexible in his politics to secure a baronetcy at the Restoration. (see Biography 4 below)

1662: Thelwall, Cheshire – “Walk along Weaste Lane until you see a stile and a footpath sign on the left. It is opposite an attractive white house fronted by a high beech hedge. Follow the tractor track across the field which eventually becomes a single file path and takes you over the Bridgewater Canal. This is Pickering Bridge and is named after a family who came to the area in 1662.
……  “The Pickering family, who were next in the possession of the manor of Thelwall, were of a very ancient descent in the county of Chester, and appear to have been, from time immormial, landed proprietors in the palatinate.

1881: Migration of Pickering to Canada  – Early records of Pickering families emigrating to Canada were born in Runcorn and Warrington, Cheshire, England. According to the 1881 Chinguacousy, Peel, Ontario Canadian Census, William Pichering, a farmer was born in 1800 in England. His religion is stated as Methodist and occupation as “Retired Farmer”