It’s always exciting to discover a new family tree that has been handed down through the generations, but I have learned the hard way not to take them at face value. When a fifth cousin once removed sends you a family tree that was written by who-knows-who, just be careful not to take it as the” whole truth, and nothing but the truth”. Then there’s the possibility that the author’s “truth” was just plain wrong. That goes for records kept in a family bible, as well as dates on tombstones.

But family trees are so essential to confirming your own research, which makes them very valuable.

Fifth cousin, Alfhard Kowallek [deceased] sent me this lovely hand-written tree that began with Thomas Pickering, who was alive in 1695. Not much help because we don’t know his age in 1695, but we can place him in Norley a tiny village charmingly set near the river Weaver in Cheshire, England. This snippet of information is the oldest written date we have in our genealogy – so now I was faced with the challenge of identifying which Thomas this was. 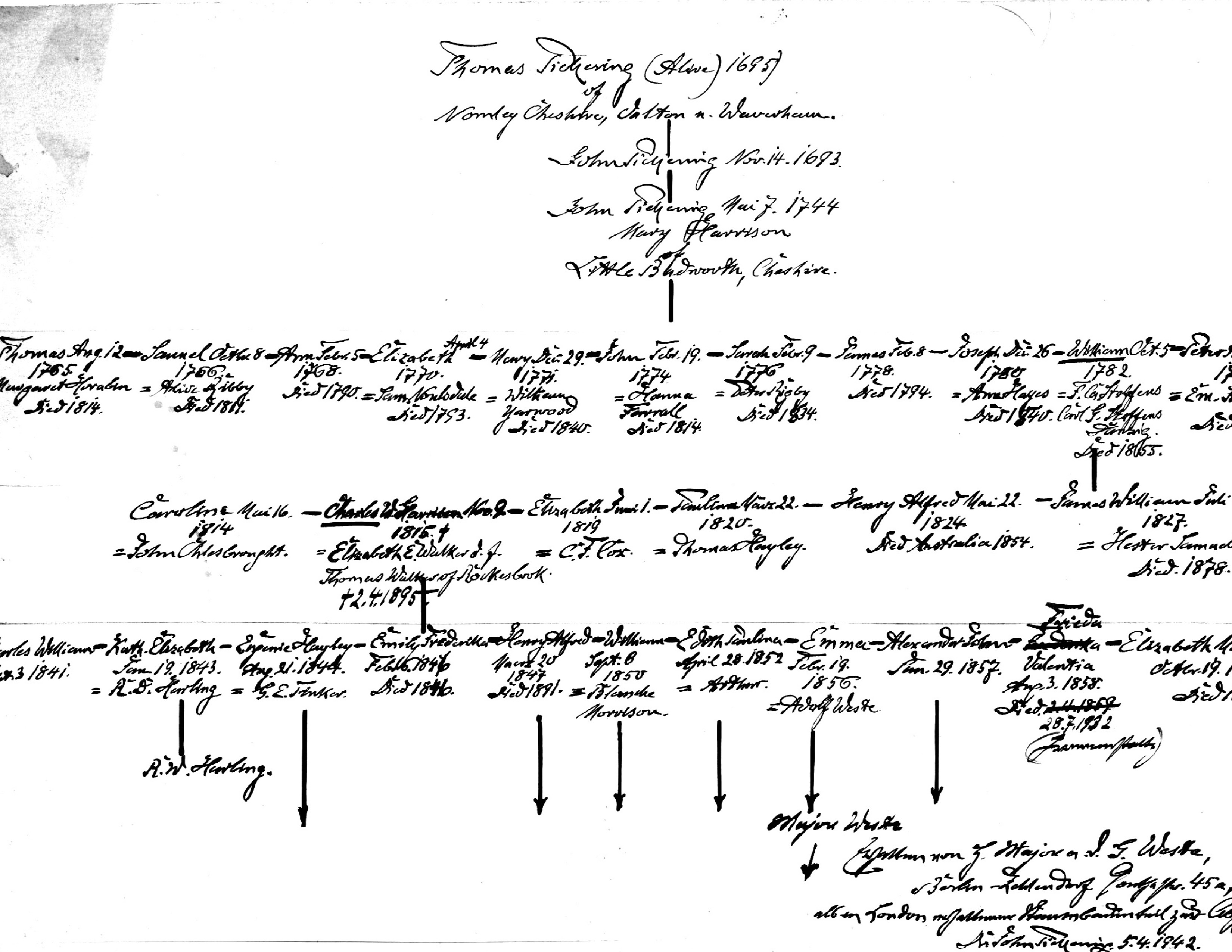 I was following Bernard’s family for a long time thinking there was a direct relationship – and I still think there is a connection. However, it was John who should have been my target.

You can see the challenges!

There is a record of Jonathan, son of Richard, who had died before 1682:

Jonathan Pickering of Crowton, yeoman – Will dated 10 Aug 1730
“ …. that betwixt Eight or nine of the Clock, or thereabouts, one Evening …. in four Days he is sure after ye last Frodsham Fair …… was on the tenth of August last, this deponent went to the House of William Barker the younger, in Norley, to be a witness ….. Will of Jonathan Pickering”.

I researched by using the dates from the handwritten family tree (above) as a guide to our earliest Pickerings.

In 1693, in Weaverham Parish there were two John Pickerings baptised.

However, if we are to believe that same handwritten family tree, then John’s father’s name should be Thomas. I could not find any John Pickering baptised in 1693 from the right parish with that father’s name. Next, I looked at 1694 and 1695. There was a father from Mobberley named Ralph Pickering, and in Grappenhall was a father of a son named John and his name was Jo. Pickering. There were no records of John Pickering baptised in 1692.

Since the family tree is has a very specific date of 14 Nov 1693 then we might be lead to believe that date is exactly accurate for a John Pickering. But is it OUR John Pickering? And could the date be wrong or belong to another John?

I continued to look for a Thomas to match the names on the family tree.

There was a Thomas born of Richard of Crowton and baptized on 10 Oct 1674 in Weaverham and he fits the possible age and location to be the father of John [1693].