The TRANSATLANTIC CABLE and the Pickering Family

It was: ‘Glory to God in the highest, on earth good will to men.’” 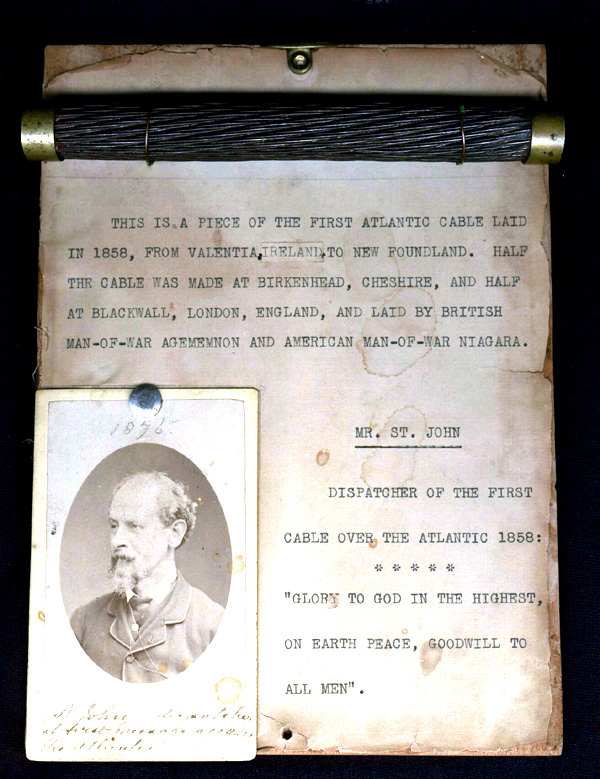 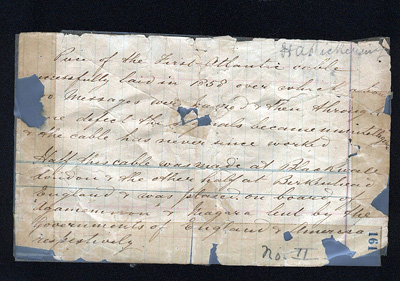 A piece of the Transatlantic Cable from 1858 attached to a plaque with a photo of the telegraph operator who sent the attached message from Charles William Harrison Pickering, Director of the laying of the second cable.

This piece of history has been handed down through our family with the handwritten note attached to the back of the plaque. Unfortunately it is difficult to read.

Many thanks to Hugh Pickering, III for supplying the photos of the cable and the newspaper articles. Thanks, also, to Jeff Tozier for the photo of his Great Grandfather, Henry Alfred Pickering. Without their help this story could not have been told.

A Brief Narrative of the Principal Incidents in the History of the Atlantic Telegraph Company. Compiled from Authentic and Official Documents by the Late George Saward, Secretary to the Company.

The preliminary business having thus been settled the original capital of the Company, consisting of 350 shares of £1,000 each, was allotted to a constituency composed of merchants and others of the highest commercial standing in London, Liverpool, Manchester, and Glasgow, and the first deposit of £200 per share having been called up, a general meeting of the shareholders was held on the 9th December, 1856, at which the following gentlemen were elected Permanent Directors:—

Source: History of the Atlantic Cable & Undersea Communications from the first submarine cable of 1850 to the worldwide fiber optic network

In Great Britain Messrs. George Peabody and Co., Messrs. Overend and Gurney, Messrs. Schroeder, Messrs. C.M. Lampson and Co., and the Right Hon. J. Stuart Wortley, of London; Mr. C.W. Pickering and Mr. Cropper, of Liverpool; Mr. Richard Gardner and Mr. Robert Lees, of Manchester; Messrs. Coats and Co., of Paisley; Mr. Crum Ewing and Mr. Walter Paterson, Glasgow, were among the earliest and most liberal subscribers to this undertaking at a time when the hope of profit from their venture was very remote, and the undertaking rather partook of the character of a grand philosophical experiment.

“… A number of electric currents were then sent through the conductor, and the insulation was reported to be perfect,—perfect so far as the comparatively crude means of testing were then capable of showing.

On the 19th of August the Directors met in London, and having discussed the reports of the engineer and of the electrician, they appointed a Committee, consisting of Mr. Lampson, Mr. Brett, Mr. Pender, Mr. Pickering, and Mr. Johnston, to investigate and report upon the causes which had led to the accident, the efficiency of the paying-out machinery, and the electrical department of the Company.

A snowy-haired old gentleman died here Tuesday night at his home, 319 North Thirteenth, quietly and in the fullness of his 93 years. He had led an unassuming life in this city for the past 26 years, his church his primary interest. Few knew that in Henry A. Pickering Salina was linked with the glory of that era when the expanding British empire was throwing out its first direct commercial contact with the new world. An intimate friend of Cyrus Field, who laid the first Atlantic Cable, Mr. Pickering himself was instrumental in bringing the first telephone to Liverpool.

British money built the first Atlantic cable and Henry A. Pickering’s father raised it. At the height of his own business career, after moving to America, Henry A. Pickering then dealing in grains and commodities at Chicago, was virtually wiped out by the “great fire.” Like his father before him, he was operating on the open market. He was ever reluctant to discuss his own career but intimates know that at the time of the Chicago fire Henry Pickering was operating on a tremendous scale, chartering his own fleet of vessels on which his exports were shipped to Liverpool.

In failing health due to advanced age, he died of heart failure at the home of his daughter, Mrs. Dave Tozier, 319 North Thirteenth, at 11 oclock Tuesday night. The body was taken to the Ryan-Sullivan Mortuary but finer arrangements had not yet been completed this afternoon.

Henry Alfred Pickering was born March 20, 1847, near Liverpool, the son of Mr. and Mrs. Charles William Harrison Pickering. He was only a small boy when he met Cyrus Field, who had journeyed to England to raise funds for his gigantic cable project. Both the American and British governments had refused financial aid.

In those days vessels sailed out of Liverpool to New York only once a week. Discouraged because he could enlist no support for his cable, Cyrus Field was preparing to sail for home the next day, his project abandoned, when he was invited to dinner at the Pickering home.

Recalling the night when they entertained Field, Mr. Pickering on one occasion said, “At the dinner table that night father asked Cyrus Field to postpone his return to New York and remain in England another week. Father told him he would accompany him to London the following day and believed he would be able to raise funds for laying the cable. Through him, Cyrus Field received the funds from father’s firm, Schroder & Company, and from Baron Rothschild’s firm.”

The elder Pickering became director of the cable laying at the Liverpool end in 1857, and the cable works were installed at the Birkenhead Docks, not far from the Pickering home. The cable was laid in 1858 and the day the operator, St. John, sent the first message to the new world, Mr. Pickering’s youngest sister was born. She was named Valencia after the island of Valencia where the cable leaves the continent.

Henry A. Pickering came to America in March 1869 as representative on an English steamship company but did not establish his permanent residence in the United States until 1884, when he left the Atlantic seaboard and moved to Junction City. He moved to Salina in 1914 and had lived here every since.

Prominent in church activities at Christ cathedral, Mr. Pickering was honored in the spring of 1932 when Bishop R. H. Mize presented him with a silver copy of the official bishop’s cross, engraved with his name. Mr. Pickering was also a member of the Modern Woodmen.

When Cyrus Field laid the first Atlantic cable. H. A. Pickering, 319 North Thirteenth street was only a small boy, but his recollections of that historical event are vivid since his father was instrumental in financing the Hugh project.

Circumstances surrounding the work, not contained in the usual histories, were related by the Salina man as he spoke of the part his father played in the project. Few know that the first message sent over the first Atlantic cable was not a message from Queen Victoria to the president of the United States as some historians maintain.

“The message from Queen Victoria to the president was handed to the telegraph operator, a Mr. St. John,” Mr Pickering said. “The telegraph operator told me later that my father put his hand on Mr. St. John’s shoulder and told him to stop. My father told him there was a message to be sent before the queen’s telegram. It was: ‘Glory to God in the highest, on earth good will to men.'”

In his memoirs, Mr Pickering writes: “In 1857 Cyrus Field made his third trip to England to raise money for laying a cable across the Atlantic. As before both the American and British governments turned a deaf ear to him.. The evening before he was to have sailed back to America he dined at our house near Birkenhead. At that dinner my father said ‘If I can induce you to stay another week here we will go to London and raise the money to carry out this project.’ This, they did.

“My father, C. W. H. Pickering, was with the firm John Henry Schroder & Company, bankers in Hamburg, Germany and London and merchants in Liverpool, doing business with the whole world. My father was made managing director of the cable company and while the cable was being made our home at New Brighton was being built. During this time our family moved to Bonn on the Rhine and I and my brother attended school there. One August 5, 1858 the day the first message crossed the Atlantic my youngest sister was born.

“The American and British governments each supplied a man-of-war to lay the cable. Half the cable was made at Blackwall, London and half at Birkenhead, Liverpool. The American ‘Niagara’ commenced to lay the cable from Newfoundland and the ‘Agemenon’ a British man-of-war began from Valencia, Ireland. They met in mid-ocean August 5, 1858, spliced the ends and lowered the cable to the bottom.

“After it had been in use about three months, this cable broke. After the ‘Great Eastern’ was launched she laid the second cable then grappled the first one, raised it and repaired the break. It worked for about three years, again broke and was abandoned. The shore end of 50 miles was two inches inches in diameter and the main cable was one inch. The center consisted of seven copper wires embedded in gutta-percha and felt. The outside was made like a ship’s rigging. Each of the outside strands was of fine wire twisted together which made the cable too pliable, allowing it to kink and break. The second cable had solid steel wires on the outside which overcame that difficulty.

“The distance covered by the undersea cable was about 1,400 miles.”