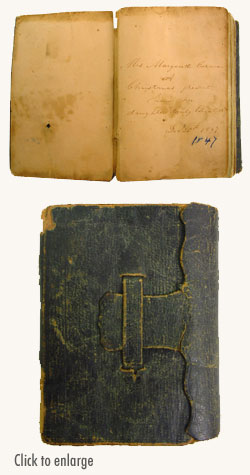 Louisa gave me and and my sister, Pam, a bible that Emily Elizabeth German DeMar gave to her mother Margarette Sterling German on December 12, 1847. She also gave them a book of poems that Emily German gave to her granddaughter Elizabeth Catherine Pickering in 1897.

» Back to Parents and Siblings of Frances Louisa Pickering 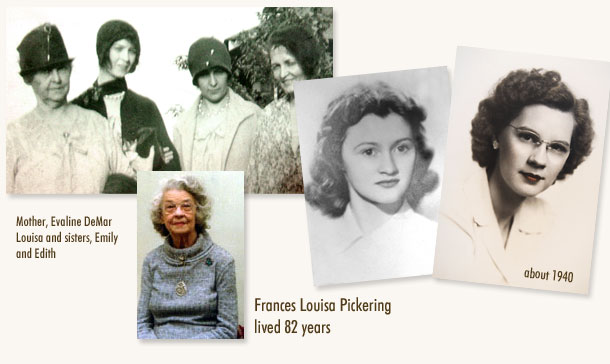 I have been luckier than most genealogists because I was able to locate an important family member just before she passed away at the age of 81. On December 11, 1977 my sisters and I visited Louisa, an “old maid great aunt” (as she was known by the family) who was living at Lycoming House Nursing Home in Philadelphia. Aunt Louisa was my grandfather’s youngest sister.

Just a few month’s before our visit, Louisa was mugged and beaten and taken to the hospital with a broken pelvis and other injuries. She was in very good health just a few months later.

During our terrific visit, Aunt Louisa [1897-1979] related stories of her childhood and memories of her grandmothers, Elizabeth Walker Pickering and Margarette Sterling German, which started my serious quest to record our family’s history. Without meeting Louisa this story might not have happened.

Louisa’s grandmother, Elizabeth Pickering, traveled in heady upper-class circles and Louisa recounted seeing some of her ball gowns worn at Queen Victoria’s court balls and as the Queen’s Lady-in-Waiting. Her father, my great grandfather, was Alexander John Pickering, [1857-1927] who was born in “Montebello” near Liverpool, England and in 1911 departed from Liverpool to the U.S. through the port of New York aboard the famous ship, Lusitania. He traveled with his oldest brother, Charles William [1841-1928]. Alexander’s occupation was listed on the passenger list as “manufacturer” and Charles was a “contractor.”

The following is information Louisa gave at that time on the Pickering family: She confirmed the history of the family ring and crest. She told about a second ring which was lost by Harry Pickering in a river out west while watering his horses. She talked about her brother, Arthur, and how kind and good he was. He called daily at 12 noon to his mother to check on how she was. If he couldn’t get a ride, he would walk to see her every weekend.